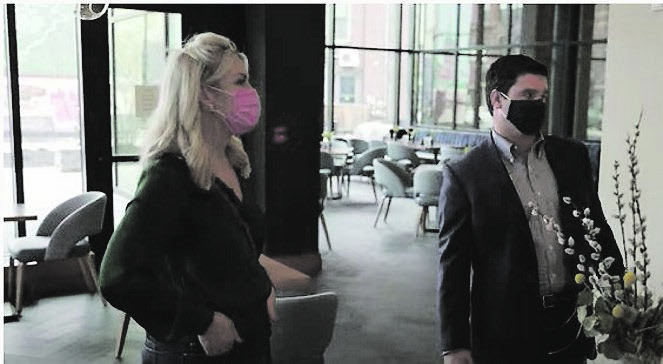 WATERVILLE — Downtown Waterville’s continued resurgence, especially during the coronavirus pandemic, has caught the attention of a Maine television program that looks to share good stories with broader audiences.

A recent episode of “MaineLife,” which airs on NEWS CENTER Maine, featured stops at Holy Cannoli and Front & Main at the Lockwood Hotel in Waterville and MaineGeneral Health’s teaching kitchen in Augusta.

“I think it just speaks volumes to the dedication that the business owners we spoke to prior to COVID who just continued to be totally devoted to the vision of revitalizing Waterville,” said show host and creator Erin Ovalle. “I think people for a long time were like: ‘Nice things in Waterville? Really?’ Now, the tone has totally changed.”

Ovalle is a former news anchor with WGME and WMTW, who now runs MaineLife Media and Style Me Portland.

The “MaineLife” episode began with Ovalle and Andrew Silsby, president and CEO of Kennebec Savings Bank, stopping at Holy Cannoli at 72 Main St.

“We weren’t going to give up,” Furchak said. “The city of Waterville has been great, and it’s been a lot of fun.”

The tour of downtown next visited the recently opened Front & Main at the Lockwood Hotel at 9 Main St., highlighting the locally sourced menu and the building’s upscale-but-relaxed atmosphere.

“The goal here is for this to be Waterville’s living room,” Lockwood Hotel General Manager Jordan Rowan said on the show.

“MaineLife” also highlighted Colby College’s activity in the downtown area, including the Paul J. Schupf Art Center, now under construction, and the Bill & Joan Alfond Main Street Commons, home to about 200 students whose living at the downtown dormitory comes with a commitment to the community.

“I’ve been doing this for 37 years in Waterville, and I think the excitement is better than it’s ever been,” Plourde said. “I think people are looking forward to all the new changes.”

“MaineLife” also took a trip down to Augusta to visit the teaching kitchen at MaineGeneral Health, a hub for education on eating nutritiously.

In her first visit to Waterville since the COVID-19 pandemic began, Ovalle said she left impressed, describing Waterville as “an underdog.”

She said viewers on social media commented on the positive improvements being made to the city’s downtown area.

“I haven’t been around any community yet that hasn’t rallied around their small businesses, and I would say Waterville is the same way,”

Ovalle said. “Those stories that came out of Waterville and other communities just made me realize how lucky we are to be in Maine during these difficult times.

“I was just excited and impressed by the people of Waterville, like any Maine community that rallied.”

“I’ve been doing this for 37 years in Waterville, and I think the excitement is better than it’s ever been.”

The tour of downtown next visited the recently opened Front & Main at the Lockwood Hotel at 9 Main St., highlighting the locally sourced menu and the building’s upscale-but-relaxed atmosphere.